This kit provides a method for detecting Sus scrofa (pig) DNA that may be present in a food sample. The principle is based on the PCR amplification of a unique species specific tag present in the mitochondrial genome of that species. The mitochondrial gene is the ideal target since it has been sequenced for many different species. Comprehensive bioinformatics analysis followed by careful primer design ensures the detection of all strains whilst excluding detection of other closely related species. Furthermore, the multiple copy of each mitochondrial genome within each cell enables the detection to be 100 times more sensitive than tests which targets single gene in the nuclear genome. Besides, the short amplicon size (~100bps) overcomes the DNA degradation problem in highly processed food, thus decreases the probability of false negatives.PCR amplification is detected by means of a double dye probe (Taqman® probe) which is degraded during PCR, releasing fluorescence. The fluorescence signal can be used to both detect and quantify the number of copies of porcine DNA present in the sample. The kit provides species specific primers and probe that detect the species of interest. The primers and probe are read through the FAM channel and detect the presence of the mitochondrial DNA belonging to Sus scrofa. As internal control, mitochondrial DNA for vertebrate are read through VIC channel. The kit is validated for use on Rotor Gene Q, ABI7300 (with additional High Rox), Biorad CFX96, Roche Lightcycler, Biometra TOptical Thermacyler.

Negative control
To validate any positive findings a negative control reaction should be included every time the kit is used. For this reaction the RNAse/DNAse free water should be used instead of template. A negative result indicates that the reagents have not become contaminated while setting up the run.

Endogenous control
One of the functions of the universal meat signal is to serve as an endogenous control, confirming the extraction of a valid biological template. An early universal meat signal indicates the presence of a good yield of animal material. A poor signal indicates that there is an insufficient amount of animal material to perform an accurate speciation test.

Store all reagents at -20°C. Stable up to the expiry date stated. 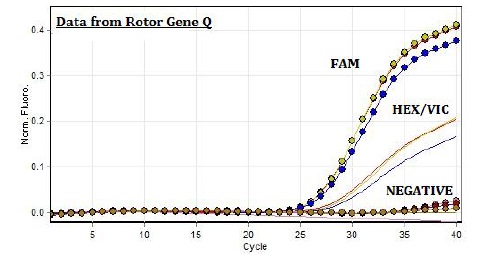 Lets Us Help You